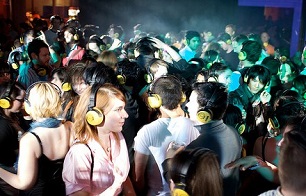 Long gone are the days when ‘online’ was synonymous with social isolation and loneliness. We are, in fact, now witnessing the exact opposite: technology is driving people to connect, meet up and mingle with others, in the ‘real world’. It makes for an interesting, easily-digested trend, begging to be turned into new services for both yourself and your consumers.

Thanks to the online revolution, hundreds of millions are now actively searching for, finding, connecting and staying in touch with like minded souls in the virtual world. Constant updates, GPS and mobile online access is now bringing this explosion of dating, networking, socializing and mingling to the real world domain.

More people than ever are now living large parts of their lives online, mingling with the masses.

An example of mass mingling is the silent disco: The concept of a silent party, Silent Gig or silent disco involves party-goers dancing to music received directly into headphones. Silent discos are often arranged via social networking sites such as Facebook. Samsung is the latest brand to jump on the bandwagon having recently orchestrated a pan-European 24-hour silent disco dance-off promotion for the new Samsung Beat DJ music phone. In this brand activation, contestants had to dance for 24 hours (listening to music on a Samsung Beat DJ), but if they received any calls or texts, they were out!